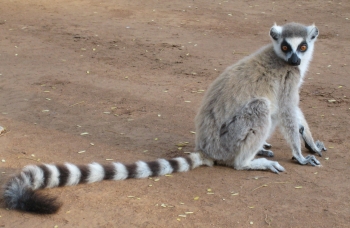 Scientists have developed a plan to save Madagascar’s lemurs by combining tourism with conservation efforts.

Dramatic declines in lemur populations in recent years have spurred scientists to propose a survival plan for the unique primates. The International Union for the Conservation of Nature considers over 90% of lemur species at risk, and over 20 species are considered critically endangered. Lemurs live only on the island of Madagascar. Isolated from other primate species, over 100 species of lemur evolved on Madagascar and represent 20% of the world’s primate species. Habitat destruction, worsened by political turmoil in Madagascar, has put increasing pressure on the primates. Illegal logging of valuable rosewood and ebony trees has destroyed lemur habitat. Conservationists have proposed a three-year emergency action plan that pairs eco-tourism with long-term research field stations and improvements to conservation programs.

Dr. Christoph Schwitzer is one of the authors of the proposal, published February 21 in Science. Dr. Schwitzer tells the BBC, “There’s always a trade-off between the destruction caused by too many tourists and the money they bring to the country that can be used for wildlife conservation. This balance for Madagascar is still very positive for conservation and it’s a long way until it may tip over.” Dr. Schwitzer, from the Bristol Zoological Society, has worked in Madagascar for over a decade.

Eco-tourism has been used in Rwanda and Uganda to support conservation efforts for mountain gorillas. Tourists pay a premium to see the primates in their natural habitat, and that revenue is used to support local communities and conservation plans. The proposed lemur conservation project is expected to cost about $7.6 million dollars. Increasing the presence of research stations has been shown to reduce illegal activity nearby, reducing logging and preventing habitat loss. Teaching more guides and establishing centers for tourists will attract more people to visit the lemurs. Madagascar already has one successful example of eco-tourism. The Maromizaha forest, home to at least 13 lemur species, has local villagers trained as guides and a multi-purpose interpretive center. Visitors to the Maromizaha forest have increased from just eight in 2008 to over 200 in 2011. Dr. Schwitzer is hopeful that the project will be able to secure funding through international aid. “We haven’t lost a single species of lemur – indeed not a single species of primate, during the last two centuries since our records began,” says Schwitzer. “We have the people, we have the place, we have the ideas, we are just lacking funding.”