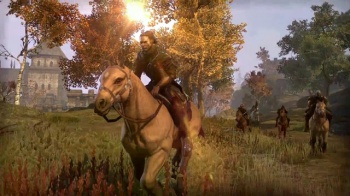 The Elder Scrolls Online is a big game – why walk when you can ride?

Things are not looking good for the wallets of Elder Scrolls fans. In addition to the standard MMO subscription model, The Elder Scrolls Online will feature microtransactions in an online shop. There won’t be very many options for real-money purchases at first, but two items have been confirmed: an unsurprising upgrade to the digital special edition, and an “entry level” horse mount.

Game director Matt Firor spilled the beans on what the Zenimax store will look like when the game launches. “The purpose of the store is to offer interested players a variety of additional services,” he says. The Imperial Edition of the game gives players a fancy white horse, a mudcrab pet, and the ability to play as the Imperial race. Upgrading from a standard game to the Imperial Edition will get you all those treats, but if you’re just interested in the horse (let’s face it, Imperials are boring), you can purchase one a la carte. The price hasn’t been specified.

The Elder Scrolls Online isn’t out yet, so the in-game economy is subject to change, but horses in the beta were pretty expensive. Earning the gold to buy yourself a mount was something of an achievement, and offering horses as a bonus for players with a little extra cash is a slippery slope. It’s worth noting that the Imperial Edition specifically grants you an exclusive white horse, while the microtransaction horse is Palomino, so I guess you could figure out who the big spenders are from the color of their steed.

Be careful, Bethesda. You’re dangerously close to your Horse Armor days, and nobody wants to revisit those memories.