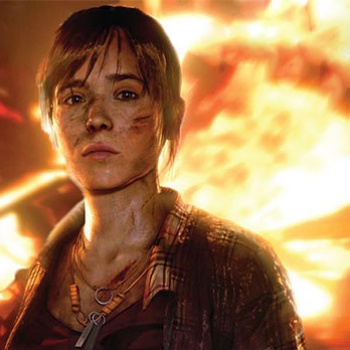 Sony is working madly to scrub fully-nude images of Ellen Page’s Beyond: Two Souls character Jodie Holmes from the net, leading to speculation that the actress might be considering legal action.

Ellen Page’s appearance in Beyond: Two Souls has become a whole lot more revealing than either she or Sony intended, thanks to the slightly creative use of a PS3 dev kit. It turns out that a shower scene featuring her character Jodie Holmes was rendered with naughty bits and all, and then covered up for use in the game, which of course meant that a simple change of camera angle revealed the young Ms. Homes in all her unclothed glory.

Sony’s been dropping the hammer on anyone hosting the images for non-specific “legal reasons,” but they’re still pretty easy to find at this point – and no, I won’t be linking them. And while a Sony PR rep clarified that “it’s not actually her body,” the company also described the situation as “very damaging for Ellen Page” and was apparently seeking to have any coverage of the matter taken down from web sites in order to “end the cycle of discussion around this,” although by now it’s probably given up hope of that actually happening.

Page herself hasn’t yet commented publicly on the matter but Sony’s frenzied response to the appearance of the images has led to speculation that legal repercussions could be in the offing. At the very least, it raises some rather awkward questions about Beyond: Two Souls mastermind David Cage: Why would he, or anyone on the Quantic Dream team, rendered Holmes’ body in full detail – and I mean, full detail – for a shower scene that was intended to be covered up? And how is it that nobody at Quantic or Sony saw this coming? I’m not sure that characterizations of Page as a “victim” really ring true, since it’s really just a matter of her face being shopped onto a CGI body, but it sure doesn’t cast anyone on the production side of the coin – and particularly David Cage – in a very good light.

8 Members of the Justice League In Their Best Costumes