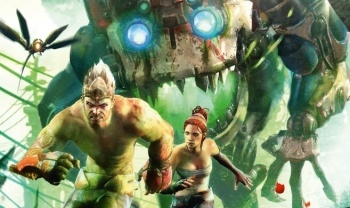 Namco’s sales numbers this year haven’t been great so far, but with Enslaved‘s underperformance, it looks like the publisher will lose even more money.

Namco Bandai has revealed, via its fiscal report for the last six months ending in September, that 2010 hasn’t been terribly kind to the company. Overall, the company recorded a total income of ¥173.5 billion ($2.13 billion), but it still sported a net loss of 1.93 billion ($23.8 million). While that may sound pretty bad, it’s a far sight better than the ¥6.04 billion ($74.4 million) loss Namco sported last year. However, it doesn’t sound like things are improving much for the publisher, either, since it recently revealed that several of its games, including the critically-lauded Enslaved: Odyssey to the West didn’t sell nearly as well as the company hoped.

Here’s how Namco Bandai originally though the games would sell:

As a result, Namco has pretty drastically reduced its sales expectation for its upcoming big-budget titles. Spatterhouse is now only expected to move around 350,00 copies, while it’s believed that Majin and the Forsaken Kingdom sell only 300,000 units. Those are some pretty drastic forecast reductions; I guess we’ll have to wait and see how the sales actually work out.