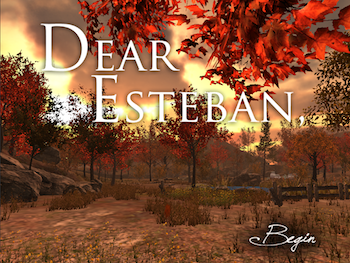 A new indie game will “blow an existential hole in the players perception of their own realities.”

Finding yourself alone in a field isn’t cause for alarm. That’s how most of your Saturdays begin. However, this time is different. It’s hard to place your finger on it. Perhaps it’s the unfamiliar autumnal landscape that beckons you forth. More than likely, it’s just the giant Orca which floats above your head, much in the way that Orcas don’t. To find the answers, you’ll have to walk the linear path and brave the expository dialog to reach the end. This is Dear Esteban, an art game made by people who don’t like art games.

If the title doesn’t tip you off, Dear Esteban is a parody/pastiche of the experimental Dear Esther. It’s just one of many games to come out of Fuck This Jam, which asked game developers to make games in genres they hate. The idea behind the Jam is that when developers aren’t held back by respect for genre conventions, they tend to make better games. Instead of writing a hate letter, the developers of Esteban claim that “it’s more a love letter to Dear Esther from the weird kid who doesn’t have a shot but you kind of feel bad for.”

Dear Esther was a bold experiment to be sure, and we should encourage games like that. However, that doesn’t mean we can’t mock them, especially when the result is a James Joyce Nature Walk. As the “art game” genre comes more into its own, it’s only right that someone should come alongside it and give it a good natured ribbing.

Dear Esteban is a free download and lasts around five minutes. As you explore its life-changing quandaries, take care; it appears to simply stop like an unfinished sentence towards the