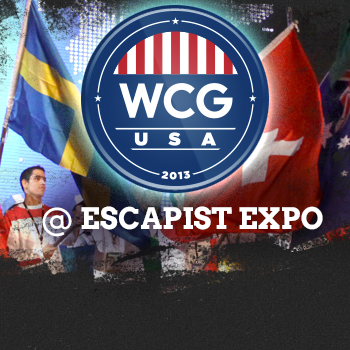 The top 20 players will be invited to play in the WCG Global Finals in Kunshan, China.

This October 4, 5, and 6, the second annual Escapist Expo will be hosting the World Cyber Games USA Finals. Top eSports competitors from around the country will converge on the Durham Convention Center, where the top 20 players will be selected based after three days of fierce competition. These players will be invited to join Team USA and attend the Global Finals in Kunshan, China starting November 28.

Participants must already have qualified for most games. If you think you’ve got what it takes to compete with the pros in titles like Starcraft II, League of Legends, and more, you can learn how to qualify here.

Then again, there is one game you can qualify for right on the show floor, namely Super Street Fighter IV. If you’re the best virtual fisticuffs player you know, and want your chance to show your patriotic spirit by representing Team USA in the Global Finals in China, the Super Street Fighter IV US Finals will be open for Escapist Expo attendees to qualify and win.

If you prove yourself to be the most proficient pugilist in the SSFIV arena, you’ll be flown across the globe to China in November, where your skills will be tested on the international stage against the greatest competitors in the world. Maybe you’ll find yourself among throngs of people chanting your name, calling for you to spill the digital blood of your foes. Perhaps you’ll earn the adulation of thousands of lesser gamers and the lasting respect of your peers in the competitive gaming scene. Then again, maybe you’ll just choke, miss a crucial block, and lose to a perfectly executed 86-hit combo. There’s only one way to know for sure.

To recap: Come to Expo this October 4, 5, and 6. Watch the professionals duke it out in your favorite RTS, MOBA, and more at the World Cyber Games tables. Join the fray yourself in the Super Street Fighter IV tournament. When you win, be flown, lodged, and fed in China gratis, and represent Team USA in the Global Finals. Sound like a plan?

If you haven’t already, now’s the time to register for Expo so you can try your hand in the Super Street Fighter IV finals. If you’d rather lend a helping hand than virtually pummel other attendees (but you could do both!), you can join our volunteer group, the Hard Corps, right here.

Here’s the full list of games that will be on display at the WCG tables at Expo this October: