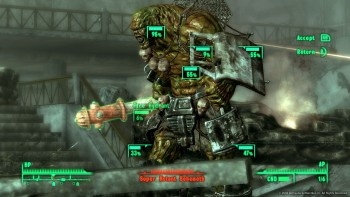 Canadian PlayStation 3 owners thinking about upgrading to the Fallout 3 Game of the Year edition might want to hold off for a bit: Reports are coming in that the new release isn’t compatible with saves from the original Canadian edition of the game.

You might think that U.S. and Canadian versions of videogames are identical. We all speak English, after all, and we live right next door to each other, so why complicate things? Sometimes that’s true, yes, but thanks to the arcane requirements of official bilingualism, sometimes it’s not. Simply put, Canada has two official languages – English and French – and as a result of the need to support both tongues, some of the games released here are slightly different from their U.S. counterparts.

Normally this doesn’t mean a thing; most gamers just throw the French manuals in the trash anyway and if the package itself isn’t bilingual then for all practical purposes it’s indistinguishable from the version released south of the border. But trouble, like beauty and herpes, is sometimes skin deep, such as in the case with the PlayStation 3 version of Fallout 3. The Game of the Year edition, featuring all five Fallout 3 DLC packs, was released yesterday and at least a few quick-thinking fans realized that instead of buying the DLC individually, it would be cheaper and easier to simply trade in their old copies of the game for the GOTY release.

A smart plan, with one rather big bump in the road: Despite assurances from Bethesda that the new release would be compatible with old saved games, it appears that saves generated by certain Canadian editions of the game aren’t being recognized by the Game of the Year. Several theories about the cause of the problem are being kicked around on the Bethesda forums but it seems most likely related to the differences between the U.S. and bilingual Canadian versions of the game.

Bethesda says it’s aware of the problem and is looking into the matter, and will hopefully have it fixed fairly quickly. In the meantime, if you reside in the Great White North and have been thinking about popping over to EB to trade in your Fallout 3 for the new hotness, you might want to wait until this is all straightened out.