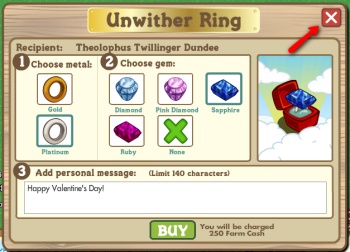 Social game developer Zynga has begun sales of the $42 “Unwither Ring,” a FarmVille item that permanently prevents its owner’s crops from dying.

Announced earlier this week via the FarmVille forums, the ring will be available thru Sunday for the price of 250 dollars of “Farm Cash” (roughly $41.67). Interestingly, players are unable to purchase the ring for themselves; instead, they may only give it as a gift to one of their FarmVille neighbors. The ring is over four times as expensive as the next most costly item in Zynga’s Facebook game, “Upgrade Farm,” which increases your arable land to “Mighty Plantation” size at the cost of $10 and your dignity.

Personally, I’m sold on the idea. Is there a better way to say “I love you” than with an overpriced cheat code to make an already brain-dead simple game even easier?