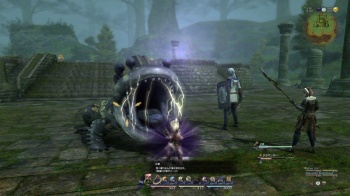 Anyone playing, and hating, Final Fantasy XIV will at least get another free month out of the troubled MMORPG.

Final Fantasy XIV hasn’t exactly been well received, despite carrying the name of one of the world’s most loved RPG franchises. Square Enix took the series back to the MMORPG space with the latest entry, just as it did with Final Fantasy XI, but impressions indicate that Square Enix shouldn’t have launched the game in its current state. If there’s any light shining within the game’s darkness, it’s that Square is able to admit its mistake, as the company has increased Final Fantasy XIV‘s free trial period for another 30 days.

In a statement on the Final Fantasy XIV community portal, Square Enix thanked anyone that is currently playing the game, and those that have provided feedback. Noting that the original 30 day free trial period will be ending within the next couple of weeks, Square writes: “Considering the nature of much of the feedback we received, and the current state of the game, we have decided to extend the free trial period for all users.” Anyone that starts playing by October 25 will now get 60 days free before a monthly charge goes into effect.

Final Fantasy XIV is apparently plagued with many issues that may not even be reparable in another 30 days, but it’s a start. Despite a flexible class system and a focus on story, the MMO sits at barely above 50% on Metacritic due to a harsh interface, the lack of player direction, and purely annoying mechanics, amongst other complaints.

Square Enix says it is “constantly growing and evolving” Final Fantasy XIV with updates and fixes, and hopes players will be patient as it improves the game. In my limited experience with the title, I was confused by the fact that I could barely figure out what to do, and wondered if it was just me. Once I did figure it out, I was repeating the same bland tasks over and over and wandering across the landscape with basically no direction. I can at least take solace in knowing that I wasn’t alone, and instead Square Enix may not have released the caliber of product that typically bears the Final Fantasy name.