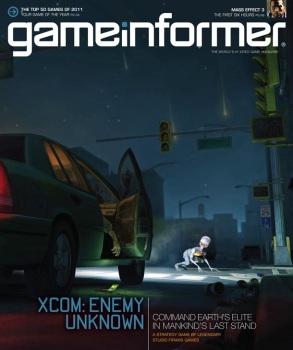 It’s fair to say that not everyone was thrilled by the news that X-Com was being “reimagined” by 2K Marin into an FPS. Given that the original X-Com is one of the most famous and beloved strategy titles in videogaming history, turning it into yet-another-story-based-shooter that appears to have no connection to the franchise beyond the name unsurprisingly rubbed some people the wrong way. But those people may now rejoice, or at the very least allow themselves a moment of cautious optimism: Firaxis, the studio that gave us Sid Meier’s Civilization and one or two other games you may have heard of, is bringing the series back for real.

As revealed by the February cover of Game Informer, the now-unhyphenated XCom: Enemy Unknown will bring the strategy classic back to life, “introducing a wider console audience to what made the storied franchise great in the first place.” Enemy Unknown will be a “full-on strategy game” giving players command of a global military force battling invading enemies, keeping governments happy and the population reassured.

“It’s been a dream of ours to recreate X-Com with our unique creative vision. We’re huge fans of the original game and it’s a once in a lifetime opportunity to re-envision a game that is as beloved as X-Com,” said Firaxis Games President Steve Martin. “We were careful to keep XCom: Enemy Unknown true to the elements that made X-Com such a revered game while delivering an entirely new story and gameplay experience for both die-hard X-Com fans and newcomers to the franchise.”

Isn’t this exciting? I’m still looking forward to the XCom shooter and will enjoy it for what it is, but there’s no getting around the fact that it’s not really X-Com. And if sequels, remakes and “reimaginings” are what we’re to be stuck with, then an X-Com do-over is long overdue.

Details will be thin until the February issue hits but it will reportedly include “destructible tactical environments,” turn-based combat framed in a real-time strategic environment and a whole lot more. XCom: Enemy Unknown is slated to come out this fall for the PC, Xbox 360 and Playstation 3. I’m so excited!

Kim Possible Taught Me What A Game Is