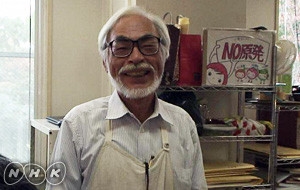 Staying busy in his retirement, the Princess Mononoke and Spritied Away director is working on a samurai manga set in the Warring States period.

Hayao Miyazaki, co-founder of Studio Ghibli and its most prominent director, certainly isn’t your typical retiree. Instead of spending his days on a beach somewhere, or learning to knit adorable Totoro mittens, the 72-year-old is working on a new project. Last week, Miyazaki was featured on Professional, Japanese public television network NHK’s profile show. The show discussed Miyazaki’s work on his last movie before retirement, The Wind Rises, and then gave a first look at his new Warring States samurai manga. Miyazaki is writing and illustrating the yet-unnamed series set in Japan. Crunchyroll reports that producer and colleague Toshio Suzuki believes that the legendary director is working on the manga without having received a manuscript payment. There’s no word yet when Miyazaki’s samurai manga will be published.

The famous director behind Studio Ghibli classics like Howl’s Moving Castle, Spirited Away, Princess Monoke, and My Neighbour Totoro is no stranger to comic illustration. Miyazaki has illustrated several manga, including his seven-volume opus Nausicaä of the Valley of the Wind, of which the first two volumes became the film of the same name. He began his career as an artist, working on anime at Toei Animation. Miyazaki worked at several animation studios before leading his first feature film. His attention to detail and dedication to his work led him to personally review every frame in his early films, a practice that earned him a reputation as a workaholic.

Koji Hoshino, head of Studio Ghibli, announced in September that Miyazaki would be retiring. His last film before his retirement is The Wind Rises, a fictionalized account of Jiro Horikoshi, the man who created the famous Mitsubishi “Zero” fighter plane used in World War II. The film was released July 20 in Japan and will be released in the United States on February 21, 2014. An official North American trailer for the film was released today.