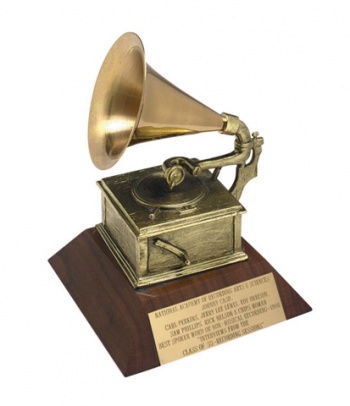 Music composed specifically for use in a videogame has never been recognized for a Grammy, but this year two videogame songs were nominated.

The Grammy Awards are given out every year by the National Academy of Recording Arts and Sciences. For those of you who might not follow American Pop Culture, the Grammys are like the Oscars or the BAFTA awards, but for music. There are what seems like thousands of categories, from Best Rock Or Rap Gospel Album to Best Spoken Word Album For Children but, for some reason, videogame music has never been including. This year, game music still doesn’t have its own category, but two songs that were made for games have been honored with a nomination. First, as previously reported, Baba Yetu was written by Christopher Tin for the splash screen for Civilization IV and it is nominated for Best Instrumental Arrangement Accompanying Vocalists. Also nominated is Megadeth’s Sudden Death, which was written by Dave Mustane to appear in Guitar Hero: Warriors of Rock.

“Working on Sid Meier’s Civilization IV was a thrill for me – not only because it was a game that I grew up playing obsessively, but because it was my first-ever videogame job,” said Tin. “Firaxis gave me the time, space, and means to create something unique and special – you can’t ask for better creative conditions as a composer. I look forward to working with them again and again, from now until the end of… well, civilization.”

Unfortunately, Dave Mustane could not be reached for comment, but I’m sure he’s thrilled that the song he wrote for Warriors of Rock might get him some recognition as it’s nominated for Best Metal Performance. Megadeth’s track record at the Grammys hasn’t been very good; the band has been nominated 8 times but has never never been selected to win. Here’s hoping that nine times is the charm.

Another nominee of note is the Cee-Lo song Fuck You for Record of the Year. The song has a pretty apt videogame reference in the lyrics, which may have spawned this 8 bit remake. Sadly, the 8-bit version was not nominated.

The Grammy Awards will be announced on February 13th.