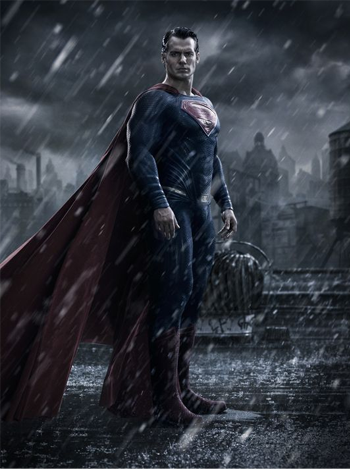 Though there had been rumblings, speculation and more than a little fan hope that Superman would be making a change of costume for this pseudo-sequel (possibly into something closer to his classic comic-book look) the uniform seen here appears to be largely identical to the one worn in 2013’s Man of Steel: Muted shades of red, blue and yellow remain, as does the lack of the traditional red shorts. A previously released image of Ben Affleck as Batman (notably a black-and-white set photo and not a promotional image) showed the character wearing an outfit closer to that of the comics than in any previous film. There have been no official images, costumed or otherwise, of Gal Gadot as Wonder Woman.

Directed by Zack Snyder, Batman v Superman: Dawn of Justice follows the events of Man of Steel and is all-but confirmed to be a prequel to a planned Justice League feature. The still-secret storyline is said to involve an uneasy first meeting for Batman and Superman and the emergence of a conflict with the supervillain Lex Luthor. In addition to Wonder Woman, other DC heroes are rumored to appear in cameo roles; with Game of Thrones’ Jason Momoa having recently been cast as Aquaman.