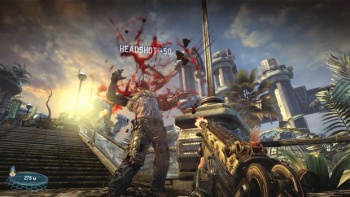 A new Fox News article is issuing fresh warnings about the damaging effects of violent videogames and questioning how much retailers are really doing to prevent kids from playing them.

John Brandon, the Fox News tech blogger who wrote the now-infamous article about Bulletstorm that, amongst other things, suggested that videogames have contributed to an increase in rape attacks, has written a new piece about the game, which again questions the possible negative effects that it might have.

In his new article, Brandon used the fact that the German version of Bulletstorm will have some of its more graphic elements removed by order of the USK – the German equivalent of the ESRB – as a springboard, asking why a game considered too violent for Germany is being released uncensored in the US. Brandon warned that kids of any age can view Bulletstorm’s content online, and quoted a number of expert psychologists, who said that exposing children to that kind of material can do significant damage.

As well as psychologists, Brandon spoke to EA’s Jeff Brown, who said that he disagreed with the USK’s decision – the USK is notable among videogames rating boards as being one of the toughest, and most squeamish, in the world – and added that he thought that videogames should be treated the same as books and movies. Brandon also spoke to the ECA’s Hal Halpin, who said that, unlike in Germany, videogames were protected in the US by the First Amendment, and so couldn’t be censored in the same way. Presumably, the question that Brandon asked Halpin compared the effects of videogames to alcohol and tobacco, as Halpin’s comment makes reference to both substances, but without seeing the question itself, it’s impossible to know for sure.

Brandon also touched on the response to his original article from the gaming press. He mentioned Rock Paper Shotgun’s efforts to get “the full story” (the quote marks were added by Brandon) and Destructoid’s article about the Amazonbombing of Carole Lieberman’s book – the expert who made the link between games and rape – which bore the headline “‘Games cause rape’ psychologist’s book gets raped.” Brandon also touched on the split in opinion that the Amazonbombing caused, quoting one comment that lamented how the act made gamers look, and another that said that it was the only way that gamers could voice their frustration at Lieberman’s “outright untruths.”

Towards the end of his article, Brandon also questioned how effective the safeguards implemented by the videogame industry and retailers were at actually preventing children from getting their hands on games like Bulletstorm. He said that many experts thought that retailers weren’t enforcing ESRB ratings, although he didn’t reveal who those experts were. He also pointed out that there were fewer safeguards when buying online, although he did acknowledge that most games are sold in brick and mortar stores.

Much like his first article about Bulletstorm, Brandon’s latest piece contains a fairly significant factual inaccuracy. In this instance, it’s the assertion that retailers aren’t enforcing ESRB ratings, when in fact, FTC studies show that they are some of the most rigorously enforced ratings in the US. While this error is rather significant, and colors the entire final third of the article, it’s arguably not as bad as the implication that it’s game makers and retailers that should be preventing children from viewing inappropriate content, rather than parents.

At the same time as excoriating Bulletstorm for having damaging content, Brandon seems to want to absolve parents of any responsibility for protecting their children from that content, suggesting that the developers and publishers that are at fault for making the game in the first place. Brandon’s experts may be correct about the damage that violent games cause – although that’s the source of much debate – and no reasonable person is going to suggest that preventing kids from viewing inappropriate content is a bad thing. That said, preventing children from coming to harm isn’t just the job of the videogame industry, and parents have to take an active role in what their children are doing.

Bulletstorm comes out for PC, PS3 and Xbox 360 on February 22nd. Don’t buy it for your kids.