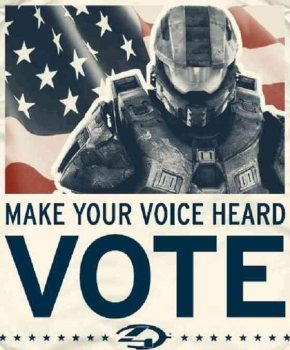 Fox News is worried that today’s release of Halo 4 could throw a wrench into the democratic process.

The most important day in American democracy is finally here: election day! It is also, as some of you may know, Halo 4 release day. Tough call, eh? Ideally, you will vote and then go play your game, although I suppose playing your game and then going to vote is okay too. But Fox News is concerned that die-hard fans may just opt for the game and skip the democratic process entirely.

Fox said “some experts” are worried that the timing of the release, which Microsoft described as a “happy coincidence,” could keep both Democrat and Republican voters at home. Public relations manager Mark LoCastro is one gamer who said he won’t be voting this year and estimated that only three out of eight of his gamer buddies will bother.

LoCastro insisted that Halo 4 isn’t related to his decision to not vote, but Fox claimed that for many gamers, “Forward Unto Dawn” carries more weight than just “Forward,” and that at least some of them will choose to wait for their preorders to arrive rather than getting down to the polling station. Analyst Jon Peddie agreed.

“There will always be that percentage who are too cool, too cynical, and too ignorant to be bothered. I would guess that’s between 10 and 15 percent of the kids of voting age,” he said. “The idiots who can’t get a date and look at the women’s breasts in the games will definitely find Halo 4 more interesting than something that requires thinking.”

Microsoft issued a statement to Fox pointing out that it’s been running a Halo 4 “get out the vote” campaign for several months, as well as a voter registration program on Xbox Live. “Microsoft also partnered with Rock the Vote to encourage and facilitate voter registration,” a rep said. “We’re continuing the message at major launch events this evening and more than 100 college campuses nationwide.”

Even so, Fox said there’s “a logical argument” that the game could have an impact on the vote. Polling data suggests that young voters are even less interested in this campaign than they were in 2008, according to tech analyst Charles King, which could also lead them to forgo voting in favor of the game. Whether or not that’s true, what’s not clear is whether young voters are skipping democracy to play the game, or if they’re just playing the game because they can’t be bothered with democracy. Fox also stated that many gamers responding to a Facebook poll said they’d already mailed in their ballot so they could focus on the game and while a few said they’ll actually go to polling stations to vote, they’re doing it more out of a sense of duty than because they actually care about who ends up President.