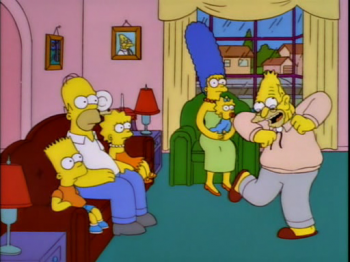 Even my ten year old self didn’t think The Simpsons was going to be around for more than two decades. Heck, I thought the Christmas special was funny and all but I firmly believed that America wasn’t ready for a prime time cartoon. Like the rest, I was dead wrong. Even though the quality hasn’t been at its mid-90s level for a while, The Simpsons remains a pinnacle of American satire that’s been aped by everyone from Mike Judge to South Park to Seth MacFarlane. Unfortunately, the series’ ratings can no longer support paying the six main cast members who voice the majority of the characters on the show their $8 million annual salary. Unless they each accept a pay cut, Fox executives would be forced to cancel the show even though such a drastic move would be bad for all parties involved.

“23 seasons in, The Simpsons is as creatively vibrant as ever and beloved by millions around the world,” Fox said in a statement yesterday. “We believe this brilliant series can and should continue, but we cannot produce future seasons under its current financial model. We are hopeful that we can reach an agreement with the voice cast that allows The Simpsons to go on entertaining audiences with original episodes for many years to come.”

Dan Castellaneta (Homer, Grampa Simpson, Krusty the Clown, and others), Julie Kavner (Marge and others), Nancy Cartwright (Bart and others), Yeardley Smith (Lisa), Hank Azaria (Moe Szyslak, Chief Wiggum and Apu Nahasapeemapetilon), and Harry Shearer (Mr. Burns, Principal Skinner, Ned Flanders, and others) earn their salaries for providing the voices for the 22 episodes each year, but they claim that Fox makes billions of dollars from syndication and merchandising.

The cast wonders why the paycut is necessary and have offered a counter-proposal to take a 30 percent paycut in exchange for a portion of the profits from syndication. “The show has made billions in profits over the years and will continue to do so as far as the eye can see down the road,” said “an insider” from the negotiations as reported by the The Daily Beast. “The actors are willing to take a pay cut of roughly a third, but that’s not good enough for Fox.”

When contract negotiations plague a 23rd season of a cartoon, no one wins. Perhaps it’s time to let the series end.