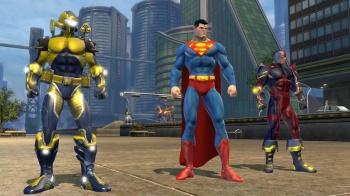 Becoming “free” has added up to a serious boost in revenues for DC Universe Online.

“MMO ditches mandatory subscription fees, makes tons of money” is hardly news anymore, is it? But I’ve got space to fill and you’ve apparently got time on your hands, so let’s check out DC Universe Online, which switched over to a free-to-play model in October. Unlike other MMOs, which generally take the plunge out of sheer desperation, Sony claimed that DCUO made the change simply because it’s a better business model.

And that certainly does appear to be the case based on tweets coming from Sony Entertainment Online President John Smedley, who said he is “really happy with how DCUO is doing.” Understandably so: the user base is growing at a rate of six percent per day, but more than 85 percent of daily log-ins are returning players. The most important measure of all – the money – is doing even more impressively; Smedley said the game has seen a 700 percent increase in daily revenues.

DCUO has also become a bit of a victim of its own success, as earlier this month Smedley acknowledged various stability and lag issues, and said Sony was working to increase the capacity of its game servers. “We are at a 900% concurrent increase since we launched f2p. We are working on getting subscribers to the front of the line,” he tweeted. “Very bluntly this has been a wee bit more successful than we planned on. Sorry.” The next day he revealed that DCUO was running at over 1000 percent of its pre-free-to-play concurrent user numbers.