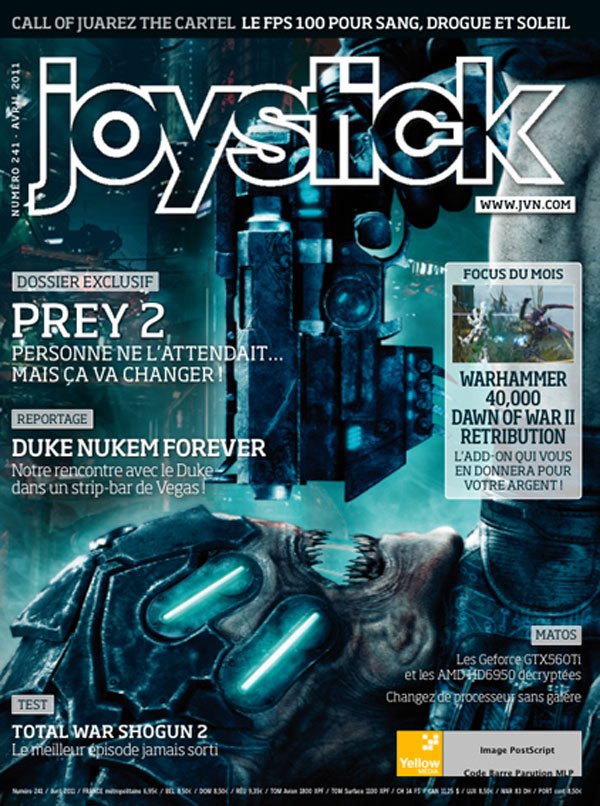 Details are rather scarce, but it looks like there are more portals and anti-gravity walkways in our future.

The next issue of the French gaming magazine, Joystick, will feature an exclusive look at the sequel to the Native American-inspired, sci-fi shooter, Prey. ZeniMax, the parent company of Bethesda and id Software, acquired the rights to the game in 2009, and it seems that it has been hard at work since then.

Unfortunately, all we have to go on is the magazine’s cover, which is pretty, but hardly info-packed. It shows one of the aliens from the first game being held down by its neck, with a gun pointed at its face. The cover has the tagline, “personne ne l’attendait … mais ça va changer,” which roughly translates to “no one expected it, but that will change.” Unfortunately, that’s all the information that the cover contains, and anything else will have to wait until it hits newsstands.

The original Prey starred Domasi “Tommy” Tawodi, whose grandfather and girlfriend are abducted by hostile aliens, leaving it up to Tommy to rescue them. It was notable for its use of portals before they were cool, and its variable gravity combat.

The game had a development arc not entirely unlike that of another 3D Realms game, Duke Nukem Forever. First announced in 1995, Prey went through a number of team and engine changes, before eventually coming to a halt in 1999, due to insurmountable technical problems. By 2001, however, other developers had dealt with those problems, meaning that 3D Realms was able to license an engine, rather than develop one from scratch. It chose id software’s idTech 4 engine, which had powered Doom 3, and handed the project over to Human Head Studios, who, along with Venom Games, brought the game to the Xbox 360 and PC in 2006.

3D Realms originally announced a sequel to the Prey not long after the first game’s release, but there seemed to be very little activity following the announcement. Supposedly, Human Head is working on the sequel as well, but whether that’s still the case remains to be seen.

UPDATE: Bethesda has confirmed that Human Head Studios is working on Prey 2, and is expecting to release the game on PC, PS3 and Xbox 360 in 2012. Prey 2’s project lead, Chris Rhinehart, said that the Human Head was thrilled to be working with Bethesda, and promised ” fast-paced action in an open, alien world.”

Zynga Says Your Mom is the New Hardcore Gamer