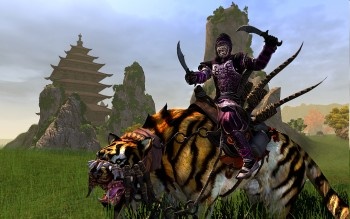 Funcom has taken the wraps off Rise of the Godslayer, the first expansion to the Hyborian MMOG Age of Conan.

Rise of the Godslayer will take players into the Empire of Khitai, a land inspired by eastern Asia where “countless hours of more brutal, sexy and savage adventure awaits.” Along with a brand-new setting and storyline, the expansion will also introduce factional gameplay and an alternate advancement system.

The Empire of Khitai is being torn apart by warring factions in a conflict set in motion years ago by a young Conan when he killed the Elephant God in the Robert E. Howard classic The Tower of the Elephant. Players can join these factions, earning rewards as they advance through the ranks with either their existing characters or one of the Khitan, a new race available in the expansion.

“Since the turn of the year the team has been working hard on bringing the Empire of Khitai to life,” said Executive Producer Craig Morrison. “Our focus now is on expanding on the strengths of the game by providing massive new regions of the world to explore, and the Empire of Khitai offers a whole new perspective on the Conan lore and universe. Age of Conan has evolved leaps and bounds since its launch last year, and we are making sure to build on the existing qualities and expand them further with the brand new content and gameplay in Rise of the Godslayer.”

The expansion will include two new mounts, the Tiger and the Wolf, but there will be no new classes, nor, strangely enough, will the level cap be raised. Instead, players will have to master the new “alternate advancement abilities,” feats and combos that open up new abilities that can then be trained and perfected over time. No release date has been set.