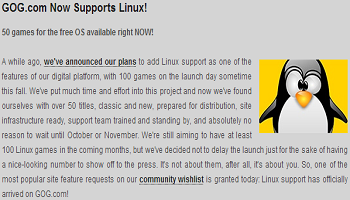 GOG has announced that its library now includes 50 games, both old and new, that can be played on Linux equipped PCs.

Earlier this year, GOG announced that it had plans to add Linux support, starting with “at least 100” games from its wide reaching library of DRM-free retro and indie games. It was an initiative that the digital retailer originally planned to launch this fall. That said, a recent posting on its website has revealed that it will launching its Linux library a tad sooner than expected: now.

“We’ve put much time and effort into this project and now we’ve found ourselves with over 50 titles, classic and new, prepared for distribution, site infrastructure ready, support team trained and standing by, and absolutely no reason to wait until October or November,” said GOG in its posting. “We’re still aiming to have at least 100 Linux games in the coming months, but we’ve decided not to delay the launch just for the sake of having a nice-looking number to show off to the press.”

The 50 released Linux games include classic titles such as Duke Nukem 3D, Pirates! Gold and Sword of the Samurai. The Linux launch additionally contains a solid offering of more modern games including Legend of Grimlock, Space Pirates and Zombies and Darwinia among others. The full list of Linux games can be found in GOG’s original announcement.

Now just personally, I’m not a Linux user. That being the case, I can still appreciate how nifty an announcement this has to be for its many devotees. GOG was instrumental in my being able to revisit and, in even more cases, discover countless retro classics for the first time. The further that sort of experience can spread, the better.