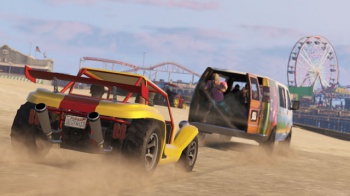 GTA Online is getting ready to deliver the first of several planned updates, adding some new ways for players to relax (or cause mayhem) on the coasts.

Rockstar has been vocal about its intent to expand the online component of Grand Theft Auto V, and now that the game has been out for a while, it’s about time to start rolling out the updates. The first add-on, dubbed “The Beach Bum Pack,” focuses on the lovely beaches around Los Santos. If you’ve been waiting for a reason to visit the coast and soak in the sun, you’ll soon have a chance to do all that – and commit all sorts of entertaining crime while you’re at it.

The Beach Bum Pack adds a little bit of everything – vehicles, weapons, jobs, clothes, the works. Expect sand buggies, flip flops, and waterfront deathmatches. I’m not sure what a beach-themed weapon might be, though. Maybe we’re just in for some standard firearms, but I’m still crossing my fingers for squirt guns. The pack is scheduled for an early November release.

Also arriving soon is the GTA Online Content Creator, or at least the first parts of it. By the end of fall, players will be able to design, publish, and play custom Deathmatch and Race Jobs, with more options to be gradually added.

For many, though, the beach isn’t that interesting. The players have expressed an overwhelming desire for Heist-style missions, and Rockstar says there will be news on that front sometime next week.