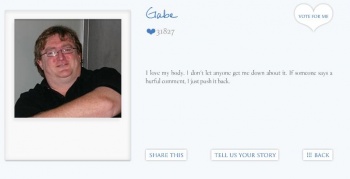 Voters showed an appreciation for the voluptuous form of Valve’s Gabe Newell in the Victoria’s Secret “Love Your Body By Victoria” contest, propelling him to the No.2 place before his entry was deemed ineligible.

Somehow I imagine that Victoria’s Secret didn’t quite have these results in mind when it launched its “Love Your Body by Victoria” contest to send an amateur model (and Victoria’s Secret connoisseur) to New York City for three days. But then again, it was its own fault for running a contest on the Internet:

Amidst all the buxom, underwear-clad would-be models on the site, one leading entry stood out from the rest – Valve managing director Gabe Newell certainly had a, uh, larger presence than any of the others on the list. In fact, with a whopping current vote total of 31827, he stood at second place in the popular vote.

As Kotaku’s Owen Good points out, the fact that Newell was second place to 4chan founder “moot” for some time indicates heavy involvement from the popular anonymous imageboard. That’s not all that surprising, really – 4chan visitors interfered with the results of a significantly more high-profile contest (the TIME Person of the Year polls) back in April.

“I love my body. I don’t let anyone get me down about it,” reads the quote on Newell’s entry. “If someone says a hurtful comment, I just push it back.” Classy, guys. Real classy.

Though Newell’s page (and presumably moot’s as well) still exist and have not had their vote totals wiped, the contest runners presumably caught onto the shenanigans, deemed Newell (who was clearly not wearing a bra at all, much less a Victoria’s Secret design) ineligible, and removed him from the active entries.