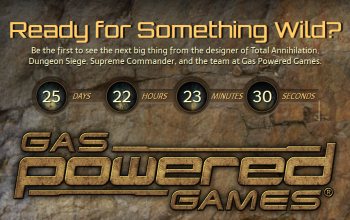 The clock is ticking on “Project W.”

What is “Project W?” I have no idea! That is, after all, why we have countdowns. If everyone knew what was happening, there wouldn’t be much point in counting down to it; the studio would just say, “Well, that’s what we’re doing,” and we’d all read the press releases and talk about it in forums and get mad when Ubisoft delays the PC release until mid-2014.

But that’s not what we have here! No, instead we have numbers, slowly ticking down to “the next big thing from the designer of Total Annihilation, Dungeon Siege, Supreme Commander, and the team at Gas Powered Games.” The URL references something called “Project W,” which isn’t much to go on – okay, it isn’t anything at all – and unlike the Baldur’s Gate Enhanced Edition teaser, there’s not even anything interesting in the site source.

We aren’t likely to find out what GPG has cooking anytime soon as there’s still nearly 26 days left on the clock, but the good news is that gives us nearly a month of wild speculation and unfounded rumors to look forward to! So, thoughts?