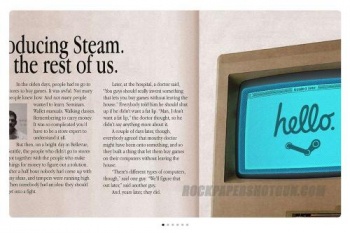 Chris Taylor of Gas Powered Games said that he loves Valve’s announcement that they are bringing Steam to Apple’s Mac platform.

Having just released Supreme Commander 2 on Valve’s Steam service last week for the PC, Chris Taylor knows how important digital distribution is. I asked him at GDC 2010 what he thought of Valve’s announcement that they will be supporting Macs. Taylor’s short answer: “I love it.”

“I heard that Apple’s market share was 10 or 11% and that last year that grew by 30%,” Taylor said. “So taking a 10 or 11% slice of the pie and making that a 14 or a 15% slice of the pie, that is awesome growth. It shows that the OS X platform is really picking up speed. That’s super exciting, we need that in the world. We need that kind of balance in our market.”

Taylor was quick to point out that although Apple has a different operating system, Mac computers run on the same hardware as PCs running Windows. “They’re both using Intel chips. So that doesn’t propose a lot of cost in changes, they’re both using ATi and nVidia graphics hardware. You’re talking about a very easy platform to bring PC games over to.”

Taylor went so far as to state that Gas Powered Games would be behind Mac support on Steam from now on: “We, as a developer, will include a Mac platform option in all of our proposals moving forward. We’re in 100% support of it. Absolutely.”

“Kudos to Valve,” Taylor said. Bringing Steam to the Mac platform is “a great, great move.”