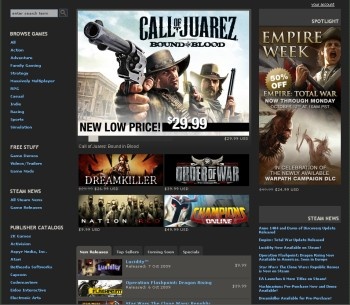 Gearbox top banana Randy Pitchford had some harsh words for Steam recently, calling it a money grab and saying that it’s “really, really dangerous for the rest of the industry to allow Valve to win.”

On a personal level, Randy Pitchford trusts the guys from Valve. Really, he does. As an industry figure, on the other hand, he’s not so sure. The reason is simple: Steam, Valve’s hugely successful digital distribution service. In a recent interview with Maximum PC, Pitchford admitted that Steam helps sell games but said he thinks the service creates an unavoidable conflict of interest for Valve and that the studio is using it to take unfair advantage of other developers, particular the smaller players.

“Steam helps. As a guy in this industry though, I don’t trust Valve,” Pitchford said. “I, personally, trust Valve. But I’m just saying, honestly, I think a lot of the industry doesn’t.”

He said he’d like to see Steam spun off from Valve as an independent entity, adding that it would be “much better if Steam was its own business.”

“There’s so much conflict of interest there that it’s horrid. It’s actually really, really dangerous for the rest of the industry to allow Valve to win,” he said. “I love Valve games, and I do business with the company. But, I’m just saying, Steam isn’t the answer. Steam helps us as customers, but it’s also a money grab, and Valve is exploiting a lot of people in a way that’s not totally fair. Valve is taking a larger share than it should for the service its providing. It’s exploiting a lot of small guys.”

So who would Pitchford like to see at the head of the digital distribution charge? Oddly enough, he seems to think Microsoft might be a pretty good choice, if they could just get their stuff together. “Microsoft has every single one of us running Windows, and it could solve this [distribution] problem in a second if done right. It’s not hard, but either the company doesn’t know how to do it, or it’s not willing to invest, or it’s got other priorities,” he said. “Gamers can see the prioritization. Microsoft is focused on the console platform. For the time being, that’s nice, because some of us aren’t sure we want Microsoft to control [distribution].”

Dragon Age: Origins‘ DLC Will Be Available Day One