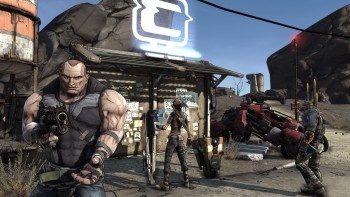 Randy Pitchford, the outspoken president of Borderlands developer Gearbox Software, thinks that Valve’s refusal to work on the PS3 is “foolish” and fanboy-esque.

You know, it feels like at this point you could be forgiven for thinking that Randy Pitchford has a bone to pick with Valve, despite what he has to say to the contrary. Last month, Pitchford said he thought the increasing popularity of the Steam platform – and letting a competitor essentially control one’s products – was worthy of concern. To be precise, he said that it was “really, really dangerous for the rest of the industry to allow Valve to win.”

Now, Pitchford is taking another potshot at the prominent PC developer. It’s no secret that Valve’s relationship with the PS3 has been slightly rough much in the same way that Gordon Freeman is a little bit soft-spoken. In 2007, Valve boss Gabe Newell flat-out called the PS3 “a waste of time”, and last year programmer Tom Leonard said that the system’s structural complexities hindered game development – leading Valve PR chieftain Doug Lombardi to explain that the company didn’t feel it could produce the level of quality on the system that it was accustomed to without devoting disproportional resources to that platform in particular.

That mindset doesn’t sit right with Randy Pitchford, who in speaking to the UK’s Official Playstation Magazine likened Valve’s shunning of the PS3 – and Lombardi’s statement in particular – to that of a fanboy in the console war:

“I noticed something on the net not too long ago. Doug Lombardi (Valve’s VP Marketing) had to take a swipe at the PS3 again, and I thought it was foolish. I read it the same way I read fanboys. Like there’s a guy who bought the Sony platform and he’s a Sony guy, so he decides he’s going to spend a certain percentage of his time bashing Microsoft. And there’s a guy on Microsoft doing the same thing. Those guys are childish and narrow minded, it’s the same kind of thing.”

Pitchford thinks that ultimately, Valve’s reticence to hop on board the PS3 train may come down to simple selfishness and pride thanks to the Steam platform. “Valve think their [sic] own stuff is the only stuff that matters, to the point where they have their own distribution platform. It’s like, I don’t care about retail, about Marketplace, or PSN, I’m going to have Steam. It’s cool, it’s good, and they’re doing a good job but at the same time they’re reliant on the rest of the world. They had to do that [Left 4 Dead] deal with EA. When I see the L4D ad on the television I don’t see a Valve logo, I see an EA logo, and when I bought it, I bought it at a store”.

Nor does Lombardi’s excuse about not wanting the PS3 to get the short end of the shaft fly with Pitchford, who points to the disparity between the PC version of Team Fortress 2 and its Xbox 360 brother as evidence that the company has no problem treating one of its markets better than another.

On the one hand, it’s hard to say that Pitchford doesn’t have even a single point, because he does. But on the other, Valve is an autonomous developer that has the right to develop for whatever platform it damn well pleases. If Gabe Newell were to suddenly announce that all future Valve titles would be programmed for the Atari Jaguar, then would anyone have the right to tell the developer that it couldn’t?