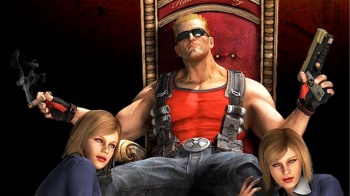 Earlier in the month, Rise of the Triad developer Interceptor Entertainment launched a countdown and teaser site for Duke Nukem: Mass Destruction, which has the badass set to star in a top-down action-RPG. While Duke Nukem fans might be excited to see how the Duke fares in an RPG, Borderlands developer Gearbox Software has thrown a monkey wrench into 3D Realms and Interceptor’s plans, as it has filed a lawsuit against both companies for trademark and copyright infringement. According to court filings, Gearbox alleges that 3D Realms — which was the original owner of the Duke Nukem IP before it was bought by Gearbox in 2010 — “sought to privately convince others that the sale never happened.” Gearbox has now issued a cease and desist letter on February 13, 2014, to 3D Realms founder Scott Miller, and series co-creator George Broussard.

Responding to the claims, Miller and Broussard has acknowledged and apologized for the infringement, with Gearbox stating, “As the filing shows, 3DR’s wrongdoing is both admitted and unfortunate for everyone who cares about Duke Nukem.” This isn’t the first time 3D Realms and Gearbox crossed paths legally. Just last year, 3D Realms filed a lawsuit against Gearbox for alleged unpaid royalties for Duke Nukem Forever. However, mere months after the suit’s filing, 3D Realms withdrew the complaint and even issued an apology.

Duke Nukem Forever is, of course, one of the most infamous games when it came to vaporware discussions. Stuck in development limbo in over a decade, the final game developed and released by Gearbox was met with universal disdain, with The Escapist’s review even saying that “If you are stuck on a deserted island with only this game to play, go fishing instead. Worth playing so that you may be able to say that you did, but otherwise imminently forgettable and not worth your time.

At this point, do people even care about the Duke Nukem brand anymore? I gather that Interceptor’s isometric action-RPG game might even benefit more without the Duke Nukem name to drag it down. Or could I be wrong and there are still hardcore Duke fans that are still waiting for the franchise’s return to its former glory?

Report: Heroes of The Storm to Use LoL‘s Free Champion Model