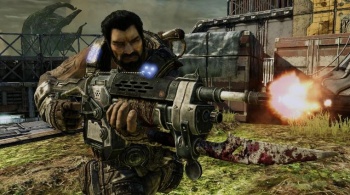 An accidental GameStop listing has revealed a new Gears of War release, but exactly what it’ll feature is unknown.

Epic Games definitely has a new Gears of War product in the works, as revealed by a recent GameStop listing, and if rumors are true it could feature the addition of Kinect functionality. GameStop put a product called Gears of War Ultimate in its online database for a short time until realizing the mistake and taking it down.

The only details that came with the listing were that the game is related to Gears of War, that it’ll be released on February 15, 2011, and that it’ll cost $29.99. However, recent Gears of War news has hinted that it could be more than a compilation package.

While the most obvious use for another Gears of War SKU would be to bundle both Gears of War and Gears of War 2‘s game-of-the-year editions into one box for one low price, rumors have been flying in recent months about Epic adding the ability to play through the series using Microsoft’s Kinect. Epic’s Cliff “CliffyB” Bleszinski said he was going to reveal something Gears of War-related at the 2010 Spike TV VGAs that would “surprise people,” but cancelled the announcement.

Microsoft confirmed to IGN that the listing is legitimate, saying: “We can confirm a forthcoming bundle SKU involving the Gears franchise, though this may not be the final SKU name. There are no specifics available at this time, except to say it will not involve Gears of War 3 or the beta.” At this time, the Gears of War 3 beta can apparently only be entered by purchasing a copy of Epic and People Can Fly’s Bulletstorm: Epic Edition.