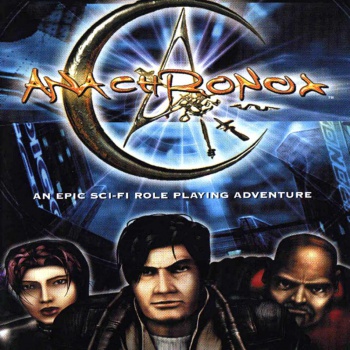 Anachronox‘s excellence can be found at GOG for $5.99.

It’s my fault that Anachronox never got the sequel it deserved. How could it not be? I stumbled across a preview shortly before its release and almost fell in love: Anachronox would be a sci-fi-comedy-RPG set in a universe where film noir detectives walked alongside superheroes, rendered through a heavily modified Quake engine by Ion Storm. And I. Didn’t. Buy it. Not until I found Anachronox in a bargain bin two years later, after low sales had crushed any hope for a follow-up and Ion Storm’s demise slammed a final nail into the coffin.

Skip ahead to 2014, and Anachronox is remembered by many as a gaming gem that nobody played alongside titles like Psychonauts and Beyond Good & Evil. Sure, it’s a little rough around the edges by modern standards, but its strong writing, unique characters, and detailed world-building help it stand out all the same. On top of that, it’s also absolutely hilarious and certain to prompt repeated chuckles across its 50+ hour campaign. If that sounds in any way intriguing, don’t make the same mistake I did: pick up it up for six bucks at GOG.com. Then you can beat it and start hoping for a sequel with the rest of us.

Your main character is Sylvester “Sly Boots” Bucelli, a private investigator living on an artificial planet named Anachronox. Boots’ current predicament is that he’s desperately short on cash and in debt to a crime lord, one who intends to collect either the money or his life within days. In a last-ditch attempt to pay his dues, Boots takes a job to collect a MysTech artifact from Anachronox’s depths, kicking off an adventure that will take him across the galaxy and expose a conspiracy to destroy time and space.

Perhaps it sounds cliched for a down-on-his-luck protagonist to save the universe, but Anachronox takes such unlikely tropes to their extreme. The game’s scope and tone varies wildly from mission to mission and even moment to moment. At one point I was casting votes for a clearly broken alien democracy. Literally minutes later I found myself fighting an army of planet-destroying space insects. Shortly after that, I agreed to find a wedding ring that was lost in a brothel. And those are all main quests! The game changes tones and genres more often than you’ll jump between planets, to the point that I often wondered if I was even playing the same game. Taken as a whole, Anachronox allows for a large and varied universe where everything fits together in ways that always manage to surprise you.

If you want proof, just look at Anachronox‘s player characters. Among the seven personalities joining your party, you’ll meet an assassin, a super-scientist, a superhero, a sentient helper droid, and a planet. Yes, an entire planet, complete with moons, shrunk to human scale to help your film noir detective. This is a motley crew that breaks the mold for mismatched protagonists (Avengers, eat your heart out), yet thanks to the game’s clever writing, they form a surprisingly cohesive unit. Character interactions are believable, within the logic of its universe, and everyone has their own arcs and internal struggles that help you sympathize for the entire cast. Even the planet.

Unfortunately, Anachronox hasn’t aged quite as well mechanically. The game follows a fairly traditional RPG system and linear RPG storyline, where I’d walk through a sequence of rooms, resolve a few turn-based encounters, and watch the plot develop via cutscenes. There are a few roleplaying moments where players can choose how to interact with other NPCs, but Anachronox isn’t about player consequences; these choices have almost no impact on the story and don’t even always provide tangible rewards. This means that most of the time, you’ll forced to watch the same battle animations unfolding over and over again, hoping that this will be the last one before something exciting happens.

When you’re not resolving combat encounters or watching cutscenes, you’ll be exploring the environment like it’s an adventure game. This is both a positive and a negative point. Like an old-school adventure game, Anachronox is filled with details and jokes that reward patient exploration, like an NPC doorman with poor artistic skills, or two potential lovers that can be drawn together from opposite ends of the map. The problem is, this often reduces gameplay to monotonously clicking on every object on the map, usually multiple times to get the full effect with each character.

Anachronox also has several “one obstacle, one solution” puzzles common to adventure games that forced me to figure out the developer’s logic instead of leveling up to beat a challenge. Ion Storm tried to mix things up with clever mini-games for each character: Boots has to solve a lockpicking puzzle when breaking into secret rooms, while your party has other skill-based games to turn to. Trouble is, most of these are finished in about 30 seconds, leaving me to wander the map and see if I missed any clickable objects.

Thankfully, Anachronox‘s story and characters offer more than enough rewards for putting up with these frustrations. The environments are varied, the world-building is rich and nuanced, and I feel like I’ve barely scratched the surface of the little details permeating throughout the game. Personal details like the notes Boots’ secretary leaves in your quest log, or that your in-game cursor is technically a major character, gives Anachronox a heart and soul that help it rise above its flaws. It also makes the lack of a sequel all the more tragic. The game’s plot was resolved to my satisfaction, but it provided a jumping-off point for future installments that might have resolved the game’s mechanical problems.

Tom Hall has teased that he still would like to make sequel in the coming decade, but until someone Kickstarts him the intellectual property rights, the original remains a worthwhile classic. Do not make the same mistake I did: Play Anachronox for yourself!

Come back next week for the beginning of a month of first-person shooters starting with Duke Nukem 3D!