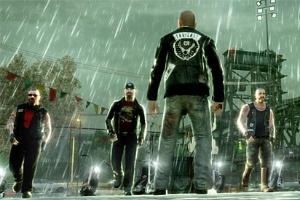 Grand Theft Auto IV’s poster child and love for all things distracting, Niko Bellic, will be taking a seat to make room for newcomer Johnny Klebitz as Rockstar’s $25 million dollar episode The Lost and Damned comes to the Xbox 360 on February 17, 2009. It was a little more than a week ago that GTAIV producer and Rockstar vice president of creative development, Dan Houser, was warning that the download content may slip into 2009 and that they didn’t want expectations to grow into something “enourmous that it [could] never be.” From the sounds of it, however, it’s just about on par with what the fans were expecting.

In The Lost and Damned players take control of Johnny Klebitz, a member of the biker gang known as The Lost, as seen in the main storyline of Grand Theft Auto IV. With a new character comes a brand-new storyline that is intended to intersect with GTAIV’s existing plot, though Houser told USA Today that “The story is not directly impacted by the decisions you took in the main game.”

Along with a new plot and missions, The Lost and Damned will also feature new weapons, vehicles, multiplayer modes and of course, additional music. It sounds like a fairly complete package — almost more like an expansion pack than an episode. As for a price, Dan Houser would like for it to cost consumers $15 or less, but everyone’s favorite analyst, Michael Pachter, expects it to check in at the $20 price point.