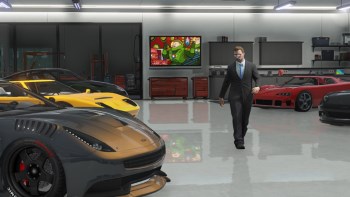 Grand Theft Auto Online is just about ready to pull off some heists.

Grand Theft Auto Online has been running since October of last year but the team-based Heist Missions have yet to be incorporated into the action. It’s a conspicuous absence; after all, why have a multiplayer GTA if you can’t pull off major multiplayer crimes?

Rockstar said in December of last year that Heists could go live early in 2014 and now it appears that those wheels are in fact turning, as the studio announced today that the feature will be added this spring. And while “this spring” isn’t exactly a hard-and-fast date, at least it’s something – and since spring is already, you know, here, it presumably means we should see some action on this front in the very near future.

The addition of Heists is the big news here but a couple of other noteworthy updates are on the way as well. Starting next week, the Creator community will be able to make their own original Capture Jobs, the best of which will be marked as “Rockstar Certified,” while the High Life Update will add new high-end apartment options, a Bullpup Rifle, new wardrobe items, three additional cars and the Dinka Thrust motorcycle. The High Life Update will also add new Jobs, allow players to own two separate properties and incorporate the Mental State stat, “which is designed to let you see just how passive or psychotically unhinged fellow players in your session really are.”