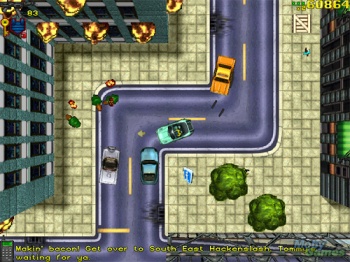 The Grand Theft Auto series was pitched with a fairly lame original title.

The design document used to pitch what became the massively popular Grand Theft Auto series has been revealed by Mike Daily, a graphics engine programmer that worked on the project for DMA Design (which became Rockstar Games North) back in 1995. Back then, it wasn’t called Grand Theft Auto, but Race ‘N’ Chase.

Of course, the title in a pitch document is far from final, but it’s amusing to take a look back at Grand Theft Auto were it called Race ‘N’ Chase instead. I doubt Race ‘N’ Chase III or Race ‘N’ Chase: San Andreas would have been received by the public quite as well.

The original Grand Theft Auto was a top-down experience and somewhat similar to what we know of the series today, though it focused on driving missions. Players still had to take out drug dealers, blow up buildings with explosive-laden tankers, and yeah, those remote-controlled toy missions go all the way back to the first game too. It actually took place in the locales of Liberty City, Vice City, and San Andreas used for later versions of Grand Theft Auto. Rockstar offers a free download of the game here.

The pitch document is an interesting look at how Grand Theft Auto simply began as a “fun, addictive and fast multi-player car racing and crashing game,” that has generated hundreds of millions of dollars as of today. It covers everything from how DMA planned to create various mission types, to the method through which it would produce the graphics, to how police would communicate. Anyone wondering how a game springs up from the dirt, or at least how one did in 1995, should take a look at Daily’s Flickr account here.