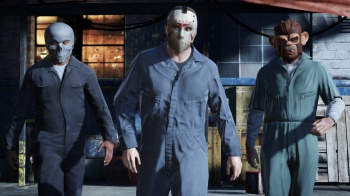 Practice makes perfect, and GTA V‘s trio of protagonists will have plenty of opportunity to improve their criminal talents.

When Grand Theft Auto: San Andreas tried its hand at RPG elements, results were … mixed, at best. As it turns out, fans of the open-world crime sandbox genre weren’t terribly enthused about directing their in-game avatar to hit the gym regularly and balance his diet. These mechanics were absent from GTA IV, but Rockstar seems to have learned a few lessons (possibly inspired by action-RPGs like Skyrim) and designed a new skill progression system for the upcoming fifth entry to the series. Despite this new system sounding like it belongs in a swords-and-sorcery type of setting, skill progression and special abilities may just enhance the classic formula.

GTA V‘s three protagonists each have their own set of skills. Retired mobster Michael is handy with a gun, while automobile aficionado Franklin is better at driving and Trevor’s military experience makes him an ace pilot. Each of these skills, among others, will improve with use. Each character’s strength, stamina, lung capacity, and stealth skills will also get better over time, allowing players to further specialize each character or balance them into jacks of all trades.

Each of the lead characters is distinguished even more by a unique special ability. Michael can slow the action into Max Payne-esque bullet time during firefights. Franklin uses a similar slow-down effect when driving to pull off tricky maneuvers, and Trevor can activate a rage mode where he inflicts more damage and becomes resistant to enemies’ attacks.

Michael, Franklin, and Trevor are more than just character classes with names, though. In their down time, each of them has their own life that they’ll be tending to while you aren’t actively controlling them. Switch characters at any given moment, and you could find your new active character at home watching TV or preparing to jump out of a helicopter, or anything in between. During missions, switching perspectives will allow you to dynamically jump between different aspects of a carefully-planned heist, or simply flank an entrenched enemy with one character will another keeps them busy. It’s a novel way to make sure the player is never more than a button’s press away from a fresh scenario, while bringing a layer of tactics to group firefights.

Between these new details and what we already know, Grand Theft Auto V is shaping up to be Rockstar’s most ambitious project yet. It also makes me that much more disappointed that the main story can’t be played through in three-player co-op, though Rockstar has its reasons.

Grand Theft Auto V is planned for a September 17 release on the Xbox 360 and PlayStation 3.