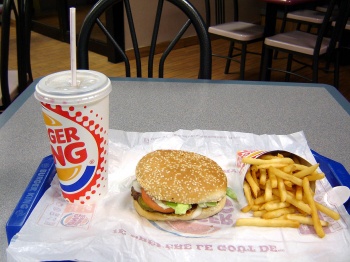 Microsoft will soon prove the true advantage of controller free technology: There’s nothing to get greasy.

If you walk into your local Burger King in the near future and see people jumping around like lunatics, don’t be afraid, and please don’t call the police. They’re probably only playing Kinect in a new promotion announced to advertise the upcoming Xbox 360 device. However, if they’re not playing Kinect upon closer inspection, you probably should call the police after all.

Burger King and Microsoft have announced a cross-promotion that will give away a Kinect to Whopper eaters every 15 minutes for the next 28 days. Buying a Whopper value meal at participating Burger King restaurants will provide a code that is entered on a special website. Winners receive a prize pack that includes the 4GB Xbox 360, Kinect with Kinect Adventures, and Kinect Sports. In addition, Burger King is offering kids’ meal toys that can be scanned into Kinect to provide a unique object in Kinectimals. These promotions aren’t exactly the Kinect sequels to Sneak King I was hoping for, but maybe those are still coming later.

Microsoft is also installing Kinect demo units in various Burger King restaurants so customers can try it out, which brings me to my next point. The controller for a videogame kiosk in a fast-food restaurant would normally become one of the most bacteria-covered objects in the history of the universe. All of that hamburger, onion ring, and french fry grease wouldn’t make for a very sanitary play environment. Microsoft may have missed the boat in neglecting to promote Kinect as a way to play games while still being able to eat food that covers your hands.

How many times have you wanted to eat cheese curls or Doritos while playing a videogame, but you just didn’t want an orange controller? Those days are now behind us, though it’ll probably be a little weird when Kinect is eventually scolding us as it recognizes that we’re eating a meatball sandwich. Sony says that PlayStation Move is more hardcore because it has buttons, but I think we’ve found the downfall of those buttons after all.