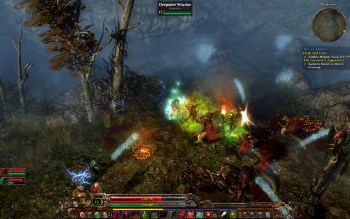 Long ago, in the strange, dark days before Kickstarter became a thing, Crate Entertainment did something unusual: It announced that it had a new game in the works and asked fans to help pay for its development up-front. The response was very positive, although it ultimately amounted to just a small portion of the game’s overall budget, and development proceeded at a relatively slow pace until Crate got around to joining the Kickstarter party itself in April 2012, earning more than $537,000 in the process – nearly double its goal.

Fast-forward to today and Grim Dawn is now a game that you can actually buy and play, albeit in an incomplete state, thanks to Steam Early Access. Crate says the game is “relatively polished” and “very playable,” but lacking in content; the first act, representing roughly one-third of the game, is available now but “significant content” and some features, including multiplayer, are not yet ready.

“Grim Dawn is a passion project by a small team of experienced developers. Please be aware that we do our best to maintain a stable, enjoyable experience but because the game is in active development and things are constantly changing, problems do sometimes arise,” the studio warned. “You may also find that our pace of development is not as fast as larger teams. If you’re looking for a polished gameplay experience right now and / or would be upset by delayed releases or slow updates, then you’d probably be happier waiting for the final release.”

Grim Dawn will sell for $29.99 at launch but is available through Early Access at a ten percent discount, dropping it to $26.99. It’s been a long time coming and there’s a lot more left to do but I like what I’ve seen of it so far, and the guys at Crate have demonstrated a remarkable commitment to the project and an admirable refusal to rush it out the door before it’s ready. More information about the game can be found at grimdawn.com.