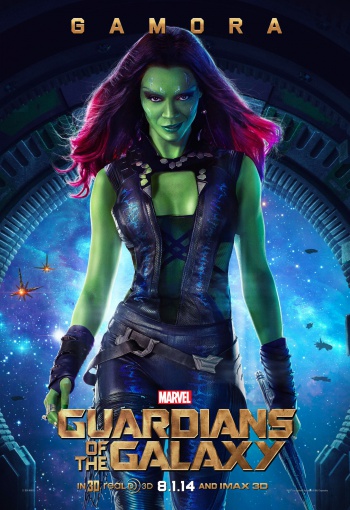 Zoe Saldana is front and center in the latest Guardians of the Galaxy character poster.

We’re quickly approaching Guardians of the Galaxy‘s release date, and that means one thing: An exponential rise in new movie posters. Thankfully these additions are looking pretty sweet so far. Last month’s cast poster highlighted some impressive space action (even if it played fast and loose Starlord’s height), while the Rocket and Groot poster perfectly encapsulated how fans imagine the characters. Next up is Zoe Saldana’s Gamora, and even though she isn’t a rocket-carrying raccoon or a walking tree, she should still prove a force to be reckoned with.

This particular poster is a little muted compared to the previous selections. There’s just not much action happening; Gamora isn’t shooting at enemies or engaged in combat, making me think this poster could just be emphasizing sex appeal. Then again, that’s a stupidly large knife she’s carrying in her hand, so maybe someone is about to die after all. I’ll tell you this much, whoever’s holding the camera might want to quickly get out of her way. Perhaps by using an escape pod.