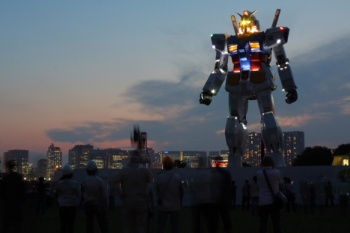 Mobile Suit Gundam creator Yoshiyuki Tomino thinks “videogames are evil,” but he doesn’t mean it in a bad way. He just thinks we could all do much better.

The audiences for Japanese megafranchise Gundam and videogames tend to intersect. I’m willing to bet that a decent amount of people who like Gundam like videogames. Hell, we’ve got someone who fits that description to a tee on The Escapist staff, our very own model robot hobbyist and overall Gundam nerd John Funk.

But the man who made Gundam what it is today – creator Yoshiyuki Tomino – doesn’t seem to have much love for games at all.

“I think that video games are evil,” Tomino said during his keynote at a Japanese game developers’ conference. “[Gaming] is not a type of activity that provides any support to our daily lives, and all these consoles are just consuming electricity! Let’s say we have about three billion people on this planet wasting their time, bringing no productivity at all. Add 10 billion more people, and what would happen to our planet? Video games are assisting the death of our planet!”

Harsh words, but it seems that Tomino means it to be tough love more than anything else. “You have to find the median — that games are not evil, perhaps not necessarily good either, but something that can be considered a pastime,” he said. “What would make people enjoy a game? How do you make them feel like it is not just a waste of time…this is what I want to tell you: I want you to create a game that does not negatively affect our daily lives and is something that is considered more productive.”

Of course, as Gamasutra rightly points out, Tomino has probably raked in a decent amount of cash from the countless videogames that have been created from Gundam. And as awesome as Gundam is, can you really consider it something that has benefited society in the way he wants games to? Let’s not get too defensive, though. Tomino sees plenty of flaws in his own industry as well, and likens them to those facing the progress of games development.

“People working on CG have become caught up with how to use these tools, but do not give a thought on creating content that will be relevant 10 years from now,” Tomino said. “As long as we remember to ask ourselves the question, I believe that a hint towards the next step can be seen”

Review: Holy Invasion of Privacy, Badman! What Did I Do to Deserve This?