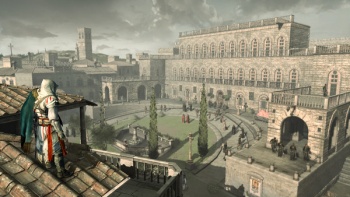 Ubisoft’s controversial, problematic Assassin’s Creed 2 DRM has reportedly been cracked and this time they really, really mean it.

Rumors that Ubisoft’s new “always on” DRM had been broken first surfaced back in early March with the launch Silent Hunter 5. Ubisoft denied the claims and eventually it came to light that the crack was real but imperfect, allowing users to access only a portion of the game’s content. But now, more than a month later, reports of a new, successful crack for Assassin’s Creed 2 are making the rounds and this time it looks like there might be something to it.

The crack, created by a group calling itself Skid Row, uses a modified version of the game’s executable to remove the DRM entirely. The files, along with a program that will purge the DRM from the retail release of the game, were uploaded to file-sharing sites on Tuesday night.

“Thank you Ubisoft, this was quiete [sic] a challenge for us, but nothing stops the leading force from doing what we do,” the group wrote in a message that turned up on Reddit and elsewhere. “Next time focus on the game and not on the DRM. It was probably horrible for all legit users. We just make their lifes [sic] easier.”

I don’t know if the claim is legit and I have neither Assassin’s Creed 2 nor the patience necessary to dick around with warez sites and cracks in order to find out. But it was virtually inevitable that the copy protection would eventually be defeated and while it sounds kind of pathetic when you say it out loud, a month and a half from launch to crack is actually a pretty respectable stretch. Does it justify the frustration and anger of thousands of users around the world with a DRM system that still appears to be wonky? That’s another question altogether.

Infinity Ward Bonuses to be “Redistributed”

Who Will Be the Next Bond?