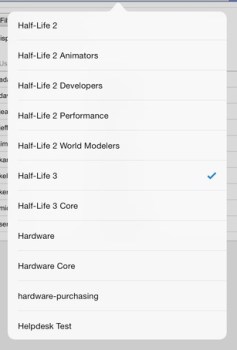 An error in Valve’s internal User Picker tool has seemingly confirmed that Half-Life 3 is in the works.

Something unusual happened late last night: Valve’s “User Picker” project management tool was briefly and for reasons unknown thrown open to the public. Among the things it revealed to those sharp-eyed and fleet-fingered enough to catch it before it disappeared into the ether are the names of the ten “core developers” currently at work on Half-Life 3.

The list includes Adam Foster, who created the Half-Life 2 mod Minerva; sound designer and musician Kelly Bailey; David Speyrer, a supervisor on Half-Life 2 and Half-Life 2: Episode 2; and Half-Life series veterans Jeff Lane and Jim Hughes. Rounding out the team are Jean Rochefort, Karl Whinnie, Sergiy Migdalskiy, Michael Coupland and Ken Banks. A total of 46 Valve employees are listed as being on the overall Half-Life 3 project.

It’s not exactly the newest of news; ValveTime noted that the project tracker was previously accessible back in June and that the existence of Half-Life 3, along with other unannounced projects including Left 4 Dead 3 and Source 2, had already been “confirmed” by that leak. But this new incident does indicate that the project has expanded since then; the headcount on Half-Life 3 at the time of that leak was 42, suggesting that it is really and truly happening.

There’s no way to tell if it’s legit, but the timing is certainly interesting. Valve recently made a big splash with a three-stage reveal of its plans for Steam Machines and yesterday it came to light that it had filed for a trademark on Half-Life 3 in Europe.