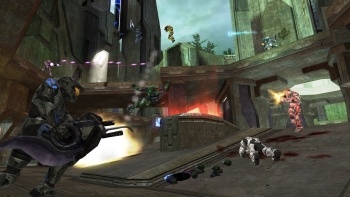 As the plug is pulled on the original Xbox Live – and Halo 2, Bungie is feeling a bit candid: Not only were Halo 2 and Halo 3 originally one game, but the famous Halo 2 E3 demo was “all smoke and mirrors.”

This week, Microsoft will be pulling the plug on its Xbox Live service for the original Xbox – on April 15th, to be specific – and with it dies the multiplayer for Halo 2, still played by thousands. It may be difficult to remember in a post-Modern Warfare 2 world, where millions play online on their Xbox 360s and PS3s (and the occasional Wii), but console online multiplayer used to be a pipe dream at best – until the massive success of Halo 2 cemented it as the way of the future.

There’s a really fascinating (if long) read over on Eurogamer with Bungie offering some insights into the development of Halo 2. As it turns out, calling the making of Halo 2 “troubled” would be an understatement: Bungie’s reach exceeded its grasp in almost every possible way. While gamers were awestruck by the E3 2003 demo, the game’s engineering lead Chris Butcher said that said demo was all “smoke and mirrors.”

The level with the Flood in the quarantine was a mere 20% of a “gargantuan, sprawling level that was meticulously built and hand-constructed, but that could never, ever have shipped in any engine,” said Butcher – and those sorts of cutbacks were endemic of a troubled, disorganized, chaotic development cycle in which entire features and levels had to be tossed out in order to desperately make the ship date.

In fact, the game that actually hit shelves was only half of what Bungie had dreamed up. The other half? Well, they took a bit more time on it with a much more organized approach this time around, and eventually released it as Halo 3. That’s right – the annoying cliffhanger ending to Halo 2? It wasn’t supposed to be like that, in Bungie’s original plan.

If you have the time, the whole interview is a really interesting read – all seven pages of it – but there are also some snippets detailing the game’s “brutal” crunch, among others.

Honestly, it’s a testament to Bungie’s skill as a developer that Halo 2 turned out as good as it did, despite the many, many troubles during the game’s development. Flawed, yes, but also good.