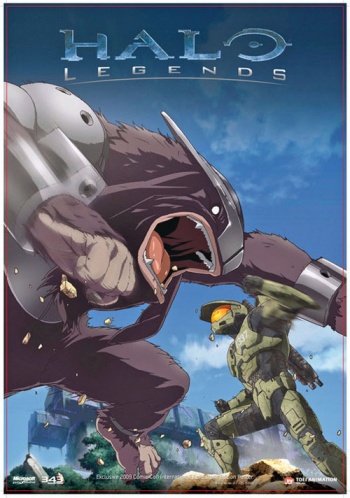 On February 9th, 2010, PS3 owners will at long last be able to play Halo on their gaming console of choice … sort of.

Okay, okay, maybe that was a bit of a cheap ploy, but it’s not exactly untrue: You will get to play Halo on your PS3 … just not in the way you were probably thinking. Unfortunately, Bungie’s ridiculously popular trilogy (quadrology?) isn’t being ported to the PS3 – but the Halo Legends collection of anime shorts is being released on Blu-Ray.

In case you missed hearing about it the first time around, Halo Legends is a collection of eight episodes telling seven different stories set in the far-flung future universe of Halo, created by five prominent Japanese animation studios: Bones, Casio Entertainment, Production I.G., Studio4C, and Toei Animation. The Blu-Ray release of Halo Legends will hit shelves right alongside the DVD on February 9th, reports Blu-Ray.com, and will include “several hours of special features, including a BD-exclusive overview of the Halo universe up until the end of Halo 3.”

True, this isn’t quite as earthshattering as if this were the actual Halo games – quite easily Microsoft’s flagship series since the launch of the first Xbox – coming to its mortal enemy’s console … but even so, it’s not the sort of thing that would have been easily imaginable even just a year or two ago.

The best part about the whole thing (other than getting to watch Halo Legends in HD, of course) is going to be watching the die-hard Sony and Microsoft fanboys try to process the information without admitting that Halo is actually pretty cool and that Blu-Ray is an impressive technological format, respectively. Maybe their heads will explode. We can only hope, right?