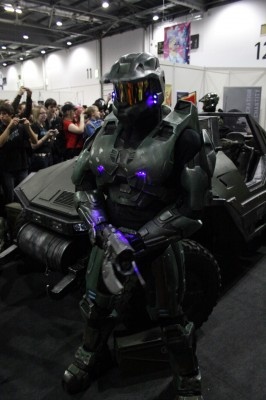 The creators of the fan-made Halo film “Operation Chastity” took to the show floor at the London Expo to show off their gorgeous hand-modified replica of the series’ “Warthog” combat vehicle.

There’s something to be said about the passion and creativity of hardcore fans. Who else would spend hundreds hours and thousands of dollars creating something that they’re never going to see a single penny from (well, not legally, anyway)? Who knows how much time and money it took to convert an old Land Rover into a gorgeous, full-size M12 ‘Warthog’ LRV from the Halo games for fan film “Operation Chastity”? It certainly wasn’t quick, and it likely wasn’t cheap.

Well, all right, we might not know how much money it cost, but we know how much time it took for workshop Custom Creations to turn a Land Rover into an all-terrain combat vehicle – the project was in development for a full year, reports Pixelated Geek. “Operation Chastity” writer/director/producer Peter Cooper, who unveiled the vehicle at the London Expo for all things geek-related, said the project is due to start filming in March, and he hopes to enter post-production by November of next year.

Oh, and Cooper expects the post-production to take eight months or so if all goes well. So, if everything goes as planned, we’ll be seeing “Operation Chastity” in the second half of 2011. That’s two years from now, and if the Warthog took a year to build … yeah, this’ll have been a labor of love three years in the making. And for what?

Fans sure are crazy.