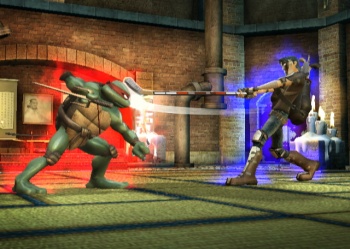 TMNT: Smash-Up has a lot in common with Super Smash Bros., but don’t write this Wii-exclusive brawler off as a Smash clone just yet.

It’s not completely accurate to call Teenage Mutant Ninja Turtles: Smash-Up a Smash Bros. clone, but come on, it’s got the word “smash” in its name, and it’s being developed by Game Arts (with some help from ex-Team Ninja staff), a studio that helped make Super Smash Bros. Brawl. Even the character select screen looks the same. That’s not necessarily a bad thing though, to be compared to Smash, and Smash-Up looks like it gets a lot of the formula right while adding its own unique touches as well.

Like in Smash, TMNT: Smash-Up pits four players against each other in manic arena-based battles. Naturally, you get your selection of your favorite TMNT characters: Leonardo, Raphael, Michelangelo, Donatello, April O’Neil, Splinter and Shredder were playable in the demo, though more are on the way (Casey Jones is in there, but wasn’t playable).Attacks are split between light, special moves/combos and stronger melee strikes that do huge damage (like in Smash), and you can do different attacks by pressing one of the four directions on the d-pad (or nunchuk) while standing or in the air (like in Smash). Items like throwing daggers, electric fields and fire breath add some variety to the fight (like in Smash).

The Wiimote works perfectly fine here (aside from an annoying motion control gimmick where you need to shake to get out of a grapple or a dizzy state), and if you could handle Wiimote controls in Brawl it’ll be no problem. No GameCube/Classic Controller was on display, though I hear tell it’ll be an option.

Just as it’s been in previous Turtles games, the difference between how each character plays lies in their weapons. Donatello obviously has range, Raphael can inflict some quick combos with his sais, and Shredder, well, Shredder is just cheap. He can do diving strikes off walls, materialize giant electric swords out of nowhere, and can lop off half your life (you have a life bar instead of smash-out percentage here) with a single hit. That whole idea of weapons-based fighting is something more akin to Soulcalibur than Smash Bros., and it definitely gives the fighting a unique feel despite all the familiarity. Yes, I played as Shredder almost the entire time. I’m cheap, but I win.

One of the other fighting series Ubisoft is taking inspiration from is Power Stone, from which Smash-Up borrows its dynamic stage design. Stage shifts and interactive environmental hazards are in abundance here: The sewer stage starts off in, well, a sewer, but you’re quickly swept deeper underground, where a nasty crocodile threatens with instant death. That damn croc also shows up in the jungle stage, but with an added twist. It attacks anyone on the bottom floor of the stage, but the platforms that keep you off the ground are held up by ropes that you can cut, which makes for some pretty wild moments.

Really, the more I played Smash-Up, the less it felt like Smash Bros. to me. The basic formula feels so similar to Smash that it’s easy to jump in and play (you know the controls, you know the basic idea) but if you’re going to play well, you can’t just act like it’s the same game. There are no Smash Attacks here to knock people out, and extended combos and dodging are keys to success. Items, too, aren’t nearly as game-changing. In some sense it’s more of a fighting game fan’s fighting game than Smash – and if anything, it should be one of (or the only, aside from Tatsunoko vs. Capcom) bright spot on the horizon for Wii owning fighting game fans. Wi-Fi multiplayer’s included as well, so get ready to get your shell rocked by some punk six-year-olds using Shredder.

Oh okay, one last comparison to Smash before someone smashes my head in. This game seems like it’s going to be full of fan service. Ubisoft is working with the original house of Turtles, Mirage Studios, to produce the game, and they’re taking inspiration from all of TMNT history to create it. You’ve got April looking like she did in the last CG movie, the Turtles in their classic incarnations, and the promise of much more (alternate costumes?). At the very least, it seems like Ubisoft has got TMNT nerds working on this game. They wouldn’t say whether or not Vanilla Ice would be a playable character, but I got the sense they were thinking the same thing I was: He better be.