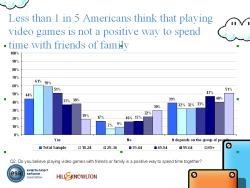 Public relations consultant Hill & Knowlton has responded to the ESA’s accusation of unprofessional and unethical behavior that arose from its release of selective survey data indicating a majority of U.S. citizens favored government regulation of videogame content.

The issue began December 5, when the company released the results of a survey of 1,147 adults which showed 60 percent felt the U.S. government should regulate the sale of violent or mature videogames, with 51 percent saying the government should be responsible for censoring in-game content. The Entertainment Software Association quickly followed up with a statement of its own, claiming the publicized data were only a small part of the overall survey which was actually largely favorable toward the gaming industry, adding that the release of the findings “was both unprofessional and unethical and its timing is questionable.”

Speaking to Ars Technica, Hill & Knowlton director Joe Paluska said, “This issue is about the changing face of the gaming industry and cultural relevance, not H&K. Even the New York Times yesterday wrote, ‘The old core demographic and the old stereotypes are being left behind. … The success of World of Warcraft, the Wii and the Guitar Hero series are all crucial elements of the same story: How video games have begun to climb out of the cultural basement and move into the mainstream living room.’ To that end, our survey illustrates some of the cultural shifts facing a rapidly growing industry.

“At H&K, our reputation is built on tackling the world’s most challenging issues, and our survey sheds light on one of the biggest issues facing the gaming industry. All surveys are intended to inform, provide insights and stir debate. Ours is no different. We paid for the survey and own the data and published it. We had always planned to conduct and publish a gaming survey in the fourth quarter and those plans were accelerated when the ESA invited us in to meet with them earlier this year.”