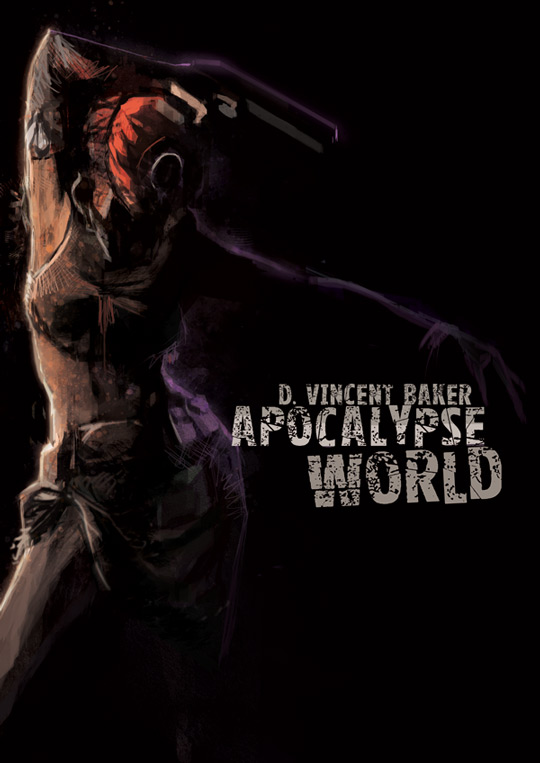 The seminal “Powered by the Apocalypse” game is getting a fresh coat of radioactive ash.

Exceedingly influential roleplaying game Apocalypse World is getting a second edition after being out of print for nearly a year, according to game designers Meguey and D. Vincent Baker. Vincent Baker posted a short notice on the game’s official forums and a tease for supporters of his “window into game development” Patreon. Meguey Baker, Vincent’s co-designer for the upcoming edition, later posted a Google+ Post with everything she’s excited about in the new edition, including:

-streamlined combat system
-streamlined Hx section
-shuffling the basic playbooks around
-expanded vehicular combat section, specifically the bits about terrain dangers
-getting our hands all over every page again and making new bloody fingerprints
-the way everything starts looking like AW to me; hello Mr. Stark, I see you are a Savvyhead.
-Right now, 2nd Ed playbooks are:
The Angel, the Battlebabe, the Brainer, the Chopper, the Driver, the Gunlugger, the Hardholder, the Hocus, the Maestro’d, the Quarantine, the Savvyhead, and the Skinner. Some other 1st ed playbooks might get 2nd ed versions, and there might be some new 2nd ed playbooks. ﻿

She also stated the timeline to the edition’s release to be something more akin to “weeks or months” – but not years.

From Meguey’s comments, it seems like the basic character archetypes of the game – the playbooks – are getting some shuffling and rearranging, and the game’s sometimes confusing systems for resolving physical violence are also being made more understandable. Given the recent release of Mad Max: Fury Road, and original Apocalypse World‘s debt to that particular vision of the world’s end, it’s no surprise to see “Vehicular Combat” being a focus of the new edition.

The first edition of Apocalypse World was hugely influential in the narrative roleplaying game community, and its quantification of player actions into discrete “moves” went on to spawn numerous successors, some more successful than others. Hit 2013 games Dungeon World and Monsterhearts both used the same game engine – what D. Vincent Baker calls being “Powered by the Apocalypse.” More generally much of the game’s self-contained nature, like characters and rules being explainable on a one-page sheet to players, has shown up in other recent roleplaying games. The basics of the system revolve around rolling two six sided dice and adding a small number, but hinge on the idea that characters never quite get everything they want out of a situation. Characters are also highly differentiated, often using unique, asymmetrical mechanics to interact with the world around them. If you’re curious about Apocalypse world, you can go see it at the game’s official site.

There’s not yet news on how development of a second edition of Apocalypse World will effect development on Apocalypse World: Dark Age, the post-fall of Rome medieval variant of the game that was announced as being in development early last year. We reached out to the Bakers for comment and we’ll update you once we know.

D. Vincent and Meguey Baker are a couple, though they usually publish their games separately and promote them together. Meguey Baker as Night Sky Games, perhaps best known for Psi*Run and 1001 Nights. D. Vincent as Lumpley Games, known for not just Apocalypse World, but also Dogs in the Vineyard and In A Wicked Age, as well as the notorious kill puppies for satan.

Complete the Tree of Life in Toren With Optional Dreams