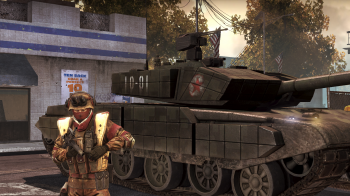 Kaos Studios staffers are pretty worried that THQ might move them to Montreal after Homefront is done, which is a very real possibility.

Homefront developer Kaos Studios sounds like a stressful place to work right now. Aside from worker claims about being in a prolonged crunch time, now it turns out that some other members of the team are concerned about the New York office’s future.

According to Develop, some Kaos staff members are reporting that they’re worried about what’s going to happen to the studio after Homefront is completed. Apparently, the concern is based on the very real possibility that THQ might uproot the entire team and move it to the publisher’s new 400-person-capacity studio in Montreal. There’s also a chance that Kaos will wind up with two different offices, one in New York and one in Montreal.

Kaos Studios General Manager David Votypka isn’t dismissing this concern, but it sounds like things aren’t certain yet: “The goal has always been to find a way to utilize [the Montreal facility] in future Kaos projects … New York is not the most inexpensive location to develop games.”

According to Votypka, the final decision from THQ won’t come “for some time yet.” Odds are that the decision will be made after Homefront releases in March.