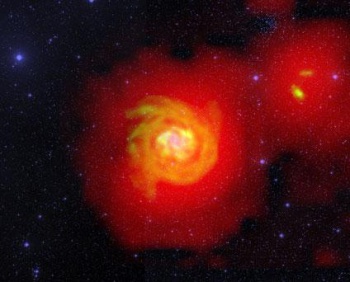 Observations from the Green Bank Telescope suggest that some stars form using hydrogen stolen from nearby galaxies.

There’s a pretty common misconception that outer space is nothing but empty blackness because… well, look at it. Empty blackness all around. Still, the more we look, the more we find that space is filled with all kinds of bizarre phenomena, from starless planets, to abnorably massive orbits, to rivers of hydrogen flowing between galaxies. That last point is a recent discovery from the National Science Foundation’s Green Bank Telescope, and astronomer D.J. Pisano believes it could fill some gaps in theories of star formation.

“We knew that the fuel for star formation had to come from somewhere. So far, however, we’ve detected only about 10 percent of what would be necessary to explain what we observe in many galaxies,” Pisano explained. “A leading theory is that rivers of hydrogen – known as cold flows – may be ferrying hydrogen through intergalactic space, clandestinely fueling star formation. But this tenuous hydrogen has been simply too diffuse to detect, until now.”

One of these possible hydrogen cold flows was seen moving into NGC 6946, a galaxy located between the Cepheus and and Cygnus constellations, 22 million light years away. Compared to the relatively calm Milky Way galaxy, star formation is far more active in NGC 6946, and cold flows might offer an explanation. Cold hydrogen, intergalactic space gas never heated by stars or supernovas, is either being drawn into the galaxy from nearby bodies or is a remnant of when NGC 6946 passed by a neighboring galaxy long ago.

Further study is required to confirm these initial observations, such as whether noticeable star populations exist in the flow’s filament structure. After all, phenomena like hydrogen spilling between galaxies has never been seen before, and was only spotted on the Green Bank Telescope because it uses a higher detection threshold than most telescopes. Regardless, one hopes the study can shine more light into how galaxies develop, not to mention provide visually stunning displays for science-fiction movies.