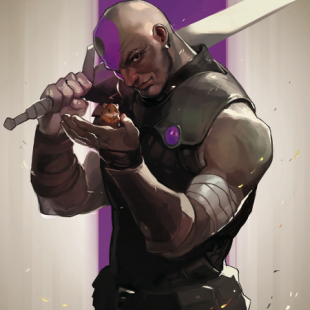 IDW Publishing has announced a new Dungeons & Dragons book based in the city of Baldur’s Gate and starring Minsc and his hamster Boo.

With the release of the fifth edition of Dungeons & Dragons inching closer and closer, tabletop gamers around the world are likely filling with that unique sort of excitement that only the prospect of hardcore dice slinging can bring. That being the case, it’s recently been revealed that the game’s latest version isn’t the only new D&D release that franchise fans have to look forward to in the near future.

IDW Publishing, in an announcement yesterdary, has revealed that it will be launching a new Dungeons & Dragons series written by Jim Zub (Skullkickers) and based in the city of Baldur’s Gate. It will also feature art by comic veterans Max Dunbar and Sarah Stone. Zub, speaking about the new book, expressed his excitement to be writing in the world of the influential fantasy franchise.

“I didn’t know it at the time, but playing Dungeons & Dragons as a kid was the foundation of my creative career,” said Zub. “It ignited a desire in me to build memorable characters and weave entertaining tales of high adventure. Getting a chance to tell new Forgotten Realms stories as part of the D&D 40th anniversary is an absolute dream come true.”

The series will launch this summer alongside the game and will start by tackling the Tyranny of Dragons storyline being specially produced for the new edition’s release. The book will also see the return of fan favorite characters like Minsc and his hamster Boo, which on its own should be reason enough to give the first few issues a try.