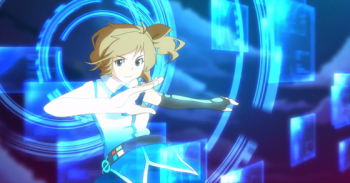 Inori Aizawa is the new mascot for Internet Explorer 11.

With the launch of Internet Explorer 11, Microsoft Singapore introduced an official mascot, Inori Aizawa, an original anime character who fights “the dark side of the internet.” Inori hits the anime checklist with magical girl transformation scene and cutesy personality. Inori’s transformation, both magical and otherwise, will take her from “a ragtag past to a modern, attractive and powerful young lady” — much how Internet Explorer hopes it has emerged from its painful past.

Internet Explorer posted a short animation on YouTube featuring the anime character fighting robots. Inori will be featured at Anime Festival Asia in Singapore this weekend. On the character’s Facebook page, she is characterized as someone who “used to be a clumsy, slow and awkward girl” and has since matured, making her sound like the run-of-the-mill anime heroine. Collateral Damage Studios, a local art group, created Inori after seeing personifications of web browsers that did not include Internet Explorer. The group’s concept for Inori was “redemption.”

“We don’t love Internet Explorer in the past,” the group wrote on its website. “It is bulky, slow… Within our research, we learnt that [redemption] is the theme for the latest IE10 campaign. They had grown up to be better and perhaps we should give them a chance.”

A picture of Inori debuted on Facebook on May 13 and had about 400 likes two days later. Other Facebook accounts, such as Anime Festival Asia, shared the picture and received several hundred additional likes. This led to a partnership with Microsoft Singapore as it adopted the character.