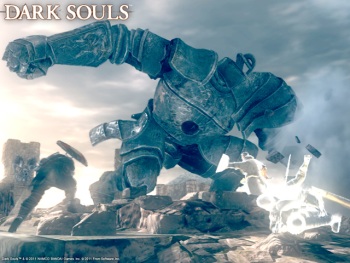 Games for Windows Live in Dark Souls does not sit well with PC gamers.

You may have heard a little something about Dark Souls coming to the PC yesterday, but good news turned to bad for a lot of gamers when the word slipped out that the game will require use of the much-maligned Games for Windows Live. After indulging in the usual forum outrage for awhile, the angered masses of the master race took its concerns to a higher court of the internet, where such grievances can be properly addressed: a petition!

“GFWL is unpopular, difficult to use, inconvenient, has terrible online support (a key feature in Dark Souls), and is downright unpleasant. After anxiously awaiting a PC release for this fantastic game it feels like a real slap in the face hearing Dark Souls will use Games for Windows Live,” it says. “We recommend Valve’s Steamworks in place, as this DRM is much easier to use, less intrusive, more reliable, and more accepted among PC gamers. Please reconsider the use of GFWL, or offer the game on both services. Thank you for taking the effort to port this game, but for a lot of customers it’s Steam or no sale.”

Before we get all dismissive, we should probably bear in mind that the PC version of Dark Souls was brought about at least in part by an earlier internet petition that attracted over 92,000 signatures. The current “No GFWL” petition is doing pretty well for itself too, garnering over 13,000 signatures in just its first day.

I can’t help but think that “Steam or no sale” gamers are cutting off their buttons to spite their mice, to coin a somewhat more relevant expression, but props to them for sticking to their guns. And who knows? Given the precedent set by the “we want Dark Souls” petition, maybe Namco will listen to this one too.

Thanks to gigastar for the tip.